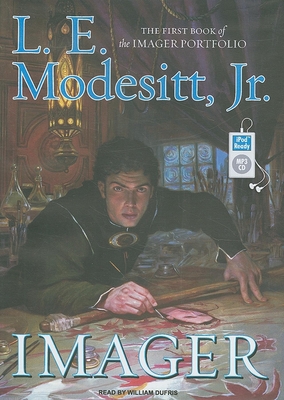 Although Rhennthyl is the son of a leading wool merchant in L'Excelsis, the capital of Solidar, the most powerful nation on Terahnar, he has spent years becoming a journeyman artist and is skilled and diligent enough to be considered for the status of master artisan-in another two years. Then, in a single moment, his entire life is transformed when his master patron is killed in a flash fire, and Rhenn discovers he is an imager-one of the few in the entire world of Terahnar who can visualize things and make them real. Rhenn is forced to leave his family and join the Collegium of Imagisle. Because of their abilities (they can do accidental magic even while asleep) and because they are both feared and vulnerable, imagers must live separately from the rest of society. In this new life, Rhenn discovers that all too many of the "truths" he knew were nothing of the sort. Every day brings a new threat to his life. He makes a powerful enemy while righting a wrong, and he begins to learn to do magic in secret. Imager is the innovative and enchanting opening of an involving new fantasy story.

"William Dufris is an engaging storyteller who gets inside his protagonist. He follows the ups and downs of the plot as if the events were happening to him." ---AudioFile

L. E. Modesitt, Jr., is the bestselling author of over forty novels, including the Imager Portfolio series and the Corean Chronicles series, as well as several other novels in the science fiction genre. He has also published technical studies and articles, columns, poetry, and a number of science fiction stories. He lives in Cedar City, Utah.