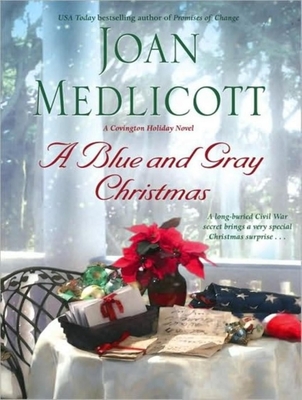 A Blue and Gray Christmas

When a rusty old tin box is unearthed at the Covington Homestead, longtime housemates Grace, Amelia, and Hannah discover that it contains letters and diaries written by two Civil War soldiers, one Union and one Confederate. The friends are captivated by the drama revealed. The soldiers were found dying on a nearby battlefield by an old woman. She nursed them back to health, hiding them from bounty hunters seeking deserters. At the end of the war, the men chose to stay in Covington, caring for their rescuer as she grew frail. But while their lives were rich, they still felt homesick and guilty for never contacting the families they'd left behind. Christmas is coming, and the letters inspire Amelia with a generous impulse. What if she and her friends were to find the two soldiers' descendants and invite them to Covington to meet? What better holiday gift could there be than the truth about these two heroic men and their dramatic shared fate? With little time left, the ladies spring into action to track down the men's families in Connecticut and the Carolinas and to make preparations in Covington for their most memorable, most historic Christmas yet.

Joan Medlicott is the nationally bestselling author of the Ladies of Covington series, as well as the stand-alone novels "Come Walk with Me" and "The Three Mrs. Parkers."

Marguerite Gavin has recorded over three hundred audiobooks in nearly every genre. A nominee for the prestigious Audie Award, she was won both "AudioFile" Earphones and "Publishers Weekly" Listen-Up Awards. "AudioFile" magazine says "Marguerite Gavin . . . has a sonorous voice, rich and full of emotion."
or
Not Currently Available for Direct Purchase