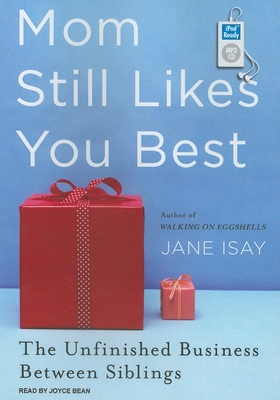 There's a myth out there that good relations between brothers and sisters do not include conflict, annoyance, disagreement, or mixed feelings. Jane Isay believes this is a destructive myth, one that makes people doubt the strength of the connection with their siblings. Brothers and sisters may love and hate, fight and forgive, but they never forget their early bonds. Based on scores of interviews with brothers and sisters young and old, Mom Still Likes You Best features real-life stories that show how differences caused by family feuds, marriages, distance, or ancient history can be overcome. The result is a vivid portrait of siblings, in love and war.

Praise For Mom Still Likes You Best: The Unfinished Business Between Siblings…

"A wise and thoughtful and clinically savvy writer...helps us take notice of how we get on with one another as boys and girls, brothers and sisters." ---Robert Coles, author of the Pulitzer Prize–winning Children of Crisis series

Jane Isay has been an editor for over forty years. She discovered Mary Pipher's "Reviving Ophelia" andedited such nonfiction classics as "Praying for Sheetrock" and "Friday Night Lights."