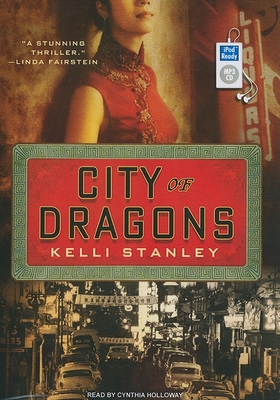 February, 1940. In San Francisco's Chinatown, fireworks explode as the city celebrates Chinese New Year with a Rice Bowl Party, a three-day-and-night carnival designed to raise money and support for China war relief. Miranda Corbie is a thirty-three-year-old private investigator who stumbles upon the fatally shot body of Eddie Takahashi. The Chamber of Commerce wants it covered up. The cops acquiesce. All Miranda wants is justice-whatever it costs. From Chinatown tenements, to a tattered tailor's shop in Little Osaka, to a high-class bordello draped in Southern Gothic, she shakes down the city-her city-seeking the truth.

Praise For City of Dragons…

"Stanley's dialogue bristles with attitude, the atmosphere is thick as the bay fog, and her protagonist is a great new dame in crime fiction. A smart, stunning thriller." ---Linda Fairstein, New York Times bestselling author

Kelli Stanley is the author of the critically acclaimed "Nox Dormienda," which won the Bruce Alexander Award for best historical mystery and was nominated for a Macavity Award.