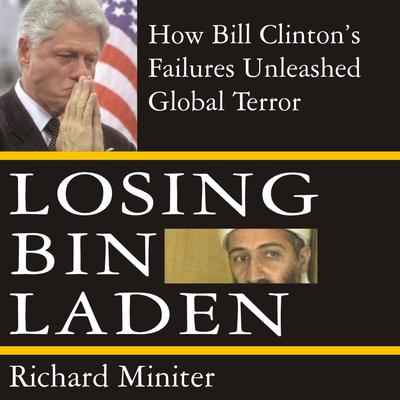 "If Clinton had fought back, the attacks on September 11, 2001, might never have happened."

Years before the public knew about bin Laden, Bill Clinton did. Bin Laden first attacked Americans during Clinton's presidential transition in December 1992. He struck again at the World Trade Center in February 1993. Over the next eight years the arch-terrorist's attacks would escalate, killing hundreds and wounding thousands - while Clinton did his best to stymie the FBI and CIA, and refused to wage a real war on terror. Why?

The answer is here in investigative reporter Richard Miniter's stunning exposé that includes exclusive interviews with both of Clinton's National Security Advisors, Clinton's counter-terrorism czar, his first Director of Central Intelligence, his Secretary of State, top CIA and FBI agents, lawmakers from both parties and foreign intelligence officials from France, the Middle East and Egypt, as well as on-the-scene coverage.

Losing bin Laden takes you inside the Oval Office, the White House Situation Room and some of the deadliest terrorist cells that America has ever faced. It is a riveting account of a terror war that bin Laden openly declared, but that Clinton left largely unfought.