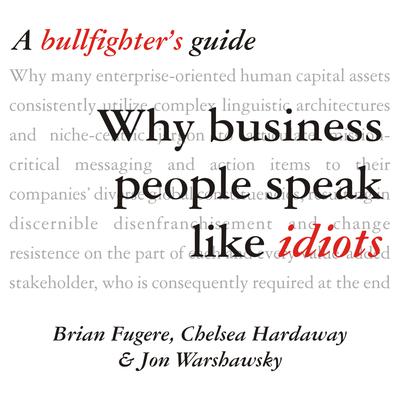 "This is just the kind of synergistic, customer-centric, upsell-driven, out-of-the-box, customizable, strategically tactical, best-of-breed thought leadership that will help our clients track to true north. Let's fly this up the flagpole and see where the pushback is."
It's Monday. Time to hit the pause button on your personality and get ready for the next meeting because, for the next five days, we'll be speaking the language of business. And, from bloated jargon and monotonous memos to syrupy slogans and deadly dull presentations, the official language of business is bull. The second we get to work, we join the masses who trade the wit and warmth of their voices for a corporate stamp of approval and the comfort of conformity.
This is not because of some evil corporate conspiracy. It's actually the result of four traps — obscurity, anonymity, hard sell, and tedium — that transform us from funny, honest, and engaging weekend people to boring business stiffs.

But for you, this epidemic of bull and boredom is a real opportunity. All those human beings who trudged to work Monday morning want something better. They don't want disclaimers, nonpromises, sugar-coated news, or canned speeches. They want someone to capture their imagination, stir their enthusiasm, and tell them the truth. And once you learn to recognize and rise above the four traps, you can be that voice they're looking for.

Grab your cape and sharpen your sword. It's time to fight the bull!

If you think you smell something at work, there's probably good reason — bull has become the official language of business. Every day, we get bombarded by an endless stream of filtered, antiseptic, jargon-filled corporate speak, all of which makes it harder to get heard, harder to be authentic, and definitely harder to have fun.


But it doesn't have to be that way. The team that brought you the Clio Award-winning Bullfighter software is back with an entertaining, bare-knuckled guide to talking straight.

This is a book for all those who want to climb the corporate ladder, but refuse to check their personality at the door.