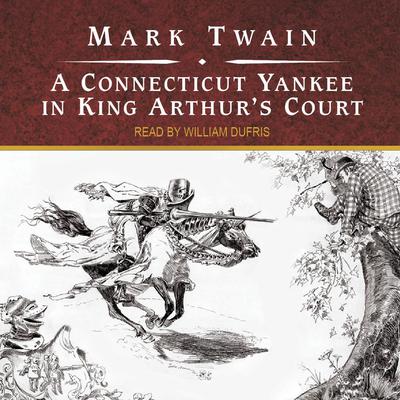 A Connecticut Yankee in King Arthur's Court is both a whimsical fantasy and a social satire chock-full of brilliant Twainisms. Hank Morgan, a nineteenth-century American—a Connecticut Yankee—by a stroke of fate is sent back into time to sixth-century England and ends up in Camelot and King Arthur's Court. Although of average intelligence, he finds himself with knowledge beyond any of those in the sixth century, and he uses it to become the king's right hand man and to challenge Merlin as the court magician. Astounded at the way of life in Camelot, Hank does the only thing he can think of to do: change them. In his attempt to civilize medieval Camelot, he experiences many challenges and misadventures.

William Dufris began his audio career doing radio plays, audiobooks, film/animation dubbing, and language tapes in London, where he lived for thirteen years. While there, he had the honor of sharing the microphone in a number of BBC Radio plays with Kathleen Turner, Sharon Gless, Stockard Channing, and Helena Bonham-Carter. These experiences led him to cofound two audio production companies: The Story Circle Ltd. and Mind's Eye Productions. He has also acted on stage and television in the United States, the United Kingdom, and Germany. William is the original voice of Bob (and Farmer Pickles/Mr. Beasley/Mr. Sabatini) in the popular children's show Bob the Builder for the United States and Canada (Series 1-9). He produces, directs, acts and engineers for his audio theatre company, Rocky Coast Radio Theatre. He has been nominated nine times as a finalist for the APA's prestigious Audie Award and has garnered twenty-one Earphones Awards from AudioFile magazine, which also named him one of the Best Voices at the End of the Century, as well as one of the Best Voices of the Year in 2008 and 2009.