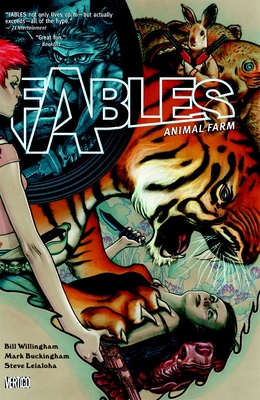 Collecting FABLES #6-10, the second story arc of the fan-favorite, critically acclaimed VERTIGO series. Travel to upstate New York, where the non-human Fable characters have found refuge on a farm, miles from mankind. But all is not well on the farm — and a conspiracy to free them from the shackles of their perceived imprisonment may lead to a war that could wrest control of the Fables community away from Snow White. Starring Goldilocks and the Three Bears. Plus, a sketchbook section featuring art by Willingham, Buckingham and Jean.

Bill Willingham has been writing, and sometimes drawing, comics for more than 20 years. During that time, he's had work published by nearly every comics publisher in the business, and he's created many critically acclaimed comic book series, including Elementals, Coventry, Proposition Players, and of course the seminal Vertigo series Fables, as well as its spin-off series Fairest, Jack of Fables and The Literals. His work has been nominated for many awards, including the Eisner, Harvey, and Ignatz comic industry awards and the International Horror Guild award. He lives somewhere near a good poker room.
or
Not Currently Available for Direct Purchase
Copyright © 2020 American Booksellers Association