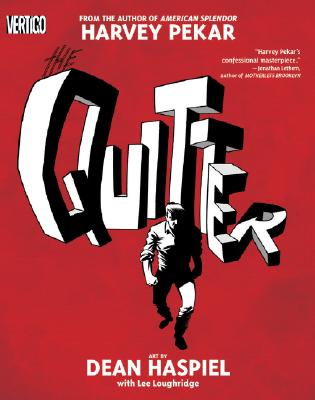 ""Pekar's most poignant and satisfying effort to date."—THE NEW YORK TIMES BOOK REVIEW"Dean Haspiel. . . .performs with virtuoso flair in THE QUITTER"—THE NEW YORKER"Brutally honest."—ROLLING STONE★"A searingly honest memoir. . . . Pekar's work dignifies the struggle of the average man."—PUBLISHERS WEEKLY, starred In this virtuoso graphic novel, Harvey Pekar — whose American Book Award-winning series American Splendor was the basis for the celebrated film of the same name — tells the story of his troubled teen years for the first time, when he would beat up any kid who looked at him wrong just to win the praise of his peers. And when he failed to impress, whether on the football team, in math class, in the Navy or on the job, he simply gave up. A true tour-de-force, THE QUITTER is the universal tale of a young man's search for himself through the frustrations, redemptions and complexities of ordinary life.With gritty, atmospheric artwork by indie-comics luminary Dean Haspiel (American Splendor, Opposable Thumbs), THE QUITTER is both Pekar's funniest and most heart-wrenching work yet, an unforgettable graphic novel for all those, like Pekar, who have tried, failed and lived to quit another day.

Cleveland, Ohio native Harvey Pekar is best known for his autobiographical slice-of-life comic book series American Splendor, a first-person account of Pekar’s downtrodden life. The series has been published on an approximately annual basis since 1976. In 1987, Pekar was honored with the American Book Award for the series. The series was the inspiration for the film starring Paul Giamatti.

Dean Haspiel is the creator of the Eisner Award-nominated Billy Dogma and the webcomics collective ACT-I-VATE. He has drawn comics for The New York Times, DC/Vertigo, Marvel Comics, Dark Horse, Scholastic, and Toon Books among others. He is best known for his collaborations with Harvey Pekar on The Quitter and with Jonathan Ames on The Alcoholic and the HBO series Bored to Death. He lives in Brooklyn.
Loading...
or
Not Currently Available for Direct Purchase