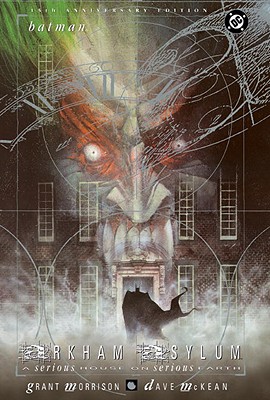 The inmates of Arkham Asylum have taken over Gotham's detention center for the criminally insane on April Fool's Day, demanding Batman in exchange for their hostages. Accepting their demented challenge, Batman is forced to endure the personal hells of the Joker, Scarecrow, Poison Ivy, Two-Face and many other sworn enemies in order to save the innocents and retake the prison. During his run through this absurd gauntlet, the Dark Knight's must face down both his most dangerous foes and his inner demons.This is the critically acclaimed Batman story that helped launch the U.S. careers of Grant Morrison and Dave McKean. The classic confrontation between the Dark Knight and his archnemeses, this story is well known for its psychological intensity and probing portraits of Batman and the Joker.ARKHAM ASYLUM includes groundbreaking art that influenced scores of artists by introducing a new school of storytelling and technique to comics. This special edition also includes Morrison's complete original script, annotated by Morrison and editor Karen Berger, many of his original thumbnail breakdowns, step-by-step samples of how the story and art came together and much more.

“ Morrison's first big commercial hit – and his first shot writing Batman, a character he would spend a great deal of time with over the course of his career – was this ground-breaking graphic novel featuring the grim, twisted artwork of painter Dave McKean. In this darkly poetic, psychologically rich tale, Batman faces off against the Joker, Two-Face, the Scarecrow and other villains inside Gotham City's house for the criminally insane”—ROLLING STONE

“Grant Morrison and Dave McKean explore that connection in Arkham Asylum, one of the finest superhero books to ever grace a bookshelf”—IGN

“Between Morrison's esoteric writing and Dave McKean's gorgeous painting, this may very well be my nominee for the definitive Batman story. Yes, even more so than The Dark Knight Returns, Year One, or The Killing Joke. Exploring both Batman and his rogues equally through significantly different characterizations than typically seen in the main DCU, Morrison boils these characters down to their essence while providing a chilling mystery story set within the confines of Gotham's home for the criminally insane”—CRAVE ONLINE

“The art of this story is striking, beautiful, and yes, today’s secret word: disturbing.”—NEWSARAMA

Grant Morrison has been working with DC Comics for more than twenty years, beginning with his legendary runs on the revolutionary titles ANIMAL MAN and DOOM PATROL. Since then he has written numerous best-sellers including JLA, BATMAN and "New X-Men" as well as the critically acclaimed creator-owned series THE INVISIBLES, SEAGUY, THE FILTH, WE3 and JOE THE BARBARIAN. Morrison has also expanded the borders of the DC Universe in the award-winning pages of SEVEN SOLDIERS, ALL-STAR SUPERMAN, FINAL CRISIS and BATMAN, INC., and he is currently reinventing the Man of Steel in the all-new ACTION COMICS.

In his secret identity, Morrison is a counterculture spokesperson, a musician, an award-winning playwright and a chaos magician. He is also the author of the "New York Times" best-seller "Supergods," a groundbreaking psycho-historic mapping of the superhero as a cultural organism. He divides his time between his homes in Los Angeles and Scotland."
Loading...
or
Not Currently Available for Direct Purchase