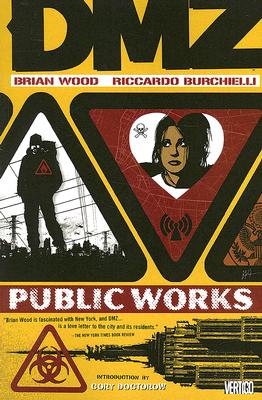 "If residents of Manhattan often feel at odds with the rest of the country, the comic book series DMZ magnifies that anxiety with its radical premise." — THE NEW YORK TIMESDon't miss the latest volume collecting the red-hot Vertigo series from Brian Wood! In Volume 3, collecting issues #13-17, Matty severs his ties to The Liberty News and becomes a free agent. He soon finds himself in over his head as he goes undercover and infiltrates a terrorist cell determined to disrupt any and all construction sites trying to rebuild the city.

Multiple Eisner Award nominee Brian Wood released his first graphic novel, Channel Zero, to considerable critical acclaim, and over the last fifteen years has created hard-hitting and socially-relevant original series such as DMZ, Northlanders, The Couriers, and The Massive. He's also written for some of the biggest titles in pop culture, with work on Star Wars, Conan The Barbarian, Lord of the Rings and X-Men. He lives with his family in Brooklyn.

Riccardo Burchielli made his debut in the world of comics in 2003 on the monthly series John Doe. During this time he also worked on short stories for Skorpyo and Lanciostory, two of the most important comics magazines in Italy. His big breakthrough in American comics came in 2005 illustrating and designing the critically acclaimed series DMZ, an intense modern-day war story, written by Brian Wood.
Loading...
or
Not Currently Available for Direct Purchase