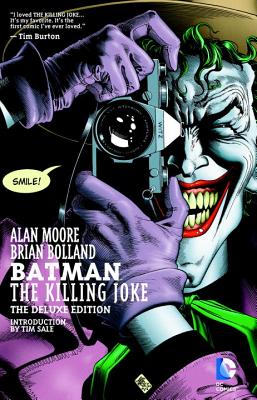 Presented for the first time with stark, stunning new coloring by Bolland, Batman: The Killing Joke is Alan Moore's unforgettable meditation on the razor-thin line between sanity and insanity, heroism and villainy, comedy and tragedy.

According to the grinning engine of madness and mayhem known as The Joker, that's all that separates the sane from the psychotic. Freed once again from the confines of Arkham Asylum, he's out to prove his deranged point. And he's going to use Gotham City's top cop, Commissioner Jim Gordon, and his brilliant and beautiful daughter Barbara to do it.

Now Batman must race to stop his archnemesis before his reign of terror claims two of the Dark Knight's closest friends. Can he finally put an end to the cycle of bloodlust and lunacy that links these two iconic foes before it leads to its fatal conclusion? And as the horrifying origin of the Clown Prince of Crime is finally revealed, will the thin line that separates Batman's nobility and The Joker's insanity snap once and for all?

Legendary writer Alan Moore redefined the super-hero with Watchmen and V for Vendetta. In Batman: The Killing Joke, he takes on the origin of comics' greatest super-villain, The Joker—and changes Batman's world forever.

Stunningly illustrated, Batman: The Killing Joke, The Deluxe Edition has been lushly re-colored by artist Brian Bolland, presenting his original vision of this modern classic for the first time.

"Easily the greatest Joker story ever told, Batman: The Killing Joke is also one of Alan Moore's finest works." —IGN

“I loved The Killing Joke…It’s my favorite. It’s the first comic I’ve ever loved.”
—Tim Burton

Alan Moore is perhaps the most acclaimed writer in the graphic story medium, having garnered countless awards for works such as Watchmen, V or Vendetta, From Hell, Miracleman and Swamp Thing. He is also the mastermind behind the America’s Best Comics line, through which he has created (along with many talented illustrators) The League of Extraordinary Gentlemen, Promethea, Tom Strong, Tomorrow Stories and Top 10. As one of the medium’s most important innovators since the early 1980s, Moore has influenced an entire generation of comics creators, and his work continues to inspire an ever-growing audience. Moore resides in central England.

After making his professional debut in 1975, artist Brian Bolland perfected his clean-line style and meticulous attention to detail on a series of popular strips for the British comics magazine 2000 AD, most notably its signature feature Judge Dredd. He went on to illustrate the 12-issue maxiseries Camelot 3000 and the Alan Moore-written graphic novel Batman: The Killing Joke for DC before shifting his focus to work almost exclusively on cover illustrations. Since then, he has earned a reputation as one of the best cover artists in the industry, and his elegantly composed and beautifully rendered pieces have graced a host of titles, including Animal Man, Batman, The Flash, The Invisibles, Wonder Woman and many more.
Loading...
or
Not Currently Available for Direct Purchase