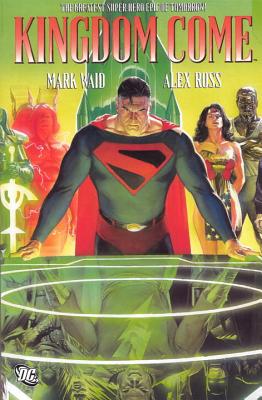 Set in the not so distant future, the DC Universe is spinning inexorably out of control. The new generation of heroes has lost their moral compass, becoming just as reckless and violent as the villains they fight. With Batman retired, Superman in a self-imposed exile and the rest of the Justice League nowhere to be found, it seems that all hope is lost.

But not for long.

After a cataclysmic event costs the lives of millions, the Justice League—led by a rejuvenated Superman—returns to bring balance back to the world. However, the new guard will not go down quietly. A battle is coming between the uncompromising protectors and a untamed group of young powerhouses—one that will define what heroism truly is.

“An older Superman, Wonder Woman, and Batman compellingly face a future where heroism has gone darkly, violently wrong. Ross’ painted, hyper-realistic visuals may be the most awe-inspiring in modern comics.” —Booklist

“Waid's writing has depth, emotion, and power; Ross's extraordinary painted artwork is masterful, realistic, and beautiful; and the story has resonance both biblical and mythical. No library should be without some edition of this book.”—Library Journal Starred Review

“One of the best comic stories ever told.”—Washington Examiner

Alex Ross first came to prominence as the illustrator of Marvel’s before producing the award-winning Kingdom Come.  With a graphic novel for Vertigo (Uncle Sam), several projects for Marvel Comics, and six oversized graphic novels starring DC's iconic heroes (collected in The World's Greatest Heroes), the top-selling Justice series and more, he continues to bring comics to a broader audience. In 2003, Ross was the subject of a retrospective of his work for DC Comics, Mythology (Pantheon Books), written and designed by Chip Kidd.
Loading...
or
Not Currently Available for Direct Purchase