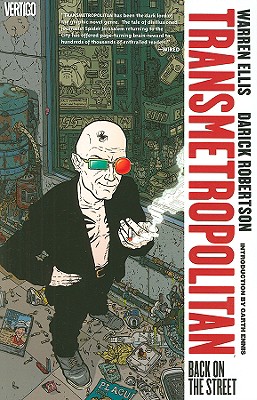 Back on the Street

DC's new editions of Transmetropolitan begin here, with this volume collecting issues #1-6 of the acclaimed Vertigo series from writer Warren Ellis and artist Darick Robertson! After years of selfimposed exile from a civilization rife with degradation and indecency, cynical journalist Spider Jerusalem is forced to return to a job he hates and a city he loathes. Working as an investigative reporter for the newspaper The Word, Spider attacks the injustices of his surreal 23rd century surroundings.

In this first volume, Spider ventures into the dangerous Angels 8 district, home of the Transients—humans who have decided to become aliens through cosmetic surgery. But Spider's interview with the Transients' leader gets him a scoop he didn't bargain for. And don't miss Spider's first confrontation with the President of the United States... in a men's room.

Warren Ellis is the award-winning writer of Transmetropolitan, Planetary, The Authority, and the writer and co-creator of the graphic novel RED, which was the basis of two major motion pictures.   He is also the author of the NYT-bestselling novels Gun Machine and Crooked Little Vein.  His newest publication is the digital short-story single Dead Pig Collector, from FSG Originals.

His awards and recognitions include the NUIG Literary and Debating Society’s President’s Medal for service to freedom of speech, the Eagle Awards Roll Of Honour for lifetime achievement in the field of comics & graphic novels, the Grand Prix de l’Imaginaire 2010, the Sidewise Award for Alternate History, and the International Horror Guild Award for illustrated narrative.

Ellis lives outside London, on the south-east coast of England, in case he needs to make a quick getaway.

Darick Robertson is a veteran comic artist who has worked at DC Comics and Marvel for nearly twenty years. He broke into the mainstream drawing Justice League for DC and went on to work for Marvel where he penciled titles including Wolverine, Spider-Man, and most notably the New Warriors. Robertson is best known as the artist / co-creator of the Eisner Award-winning series Transmetropolitan with writer Warren Ellis, which was hailed by Wired magazine as "The Graphic Novel of the Decade." He is currently working on an edgy new monthly series entitled The Boys for WildStorm with writer Garth Ennis.
or
Buy Here
Copyright © 2020 American Booksellers Association