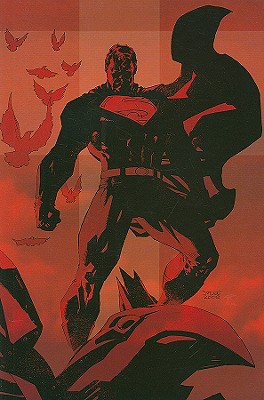 A cataclysmic event has struck the Earth. Millions of people have vanished without a trace. No one is left unaffected -- not even Superman! But after a year, Superman is left with many questions. For a hero who tries to have all the answers, it's torture. And, just as the action heats up and the stakes are raised, one huge question emerges: Just how far is Superman willing to go "For Tomorrow?"

This Absolute edition includes an all-new cover by Lee, a Jim Lee Sketchbook, and other bonus features.

Brian Azzarello has been writing comics professionally since the mid-1990s. He is the author of Jonny Double, Batman: Broken City, and the Harvey and Eisner Award-winning 100 Bullets, all created in collaboration with artist Eduardo Risso. Azzarello’s other work for DC includes Hellblazer and Loveless with Marcelo Frusin; Dark Knight III: The Master Race with Frank Miller, Andy Kubert, and Klaus Janson; Superman: For Tomorrow with Jim Lee; Joker and Luthor with Lee Bermejo; Sgt. Rock: Between Hell and A Hard Place with Joe Kubert; Filthy Rich with Victor Santos; and most recently the all-new ongoing series Wonder Woman with Cliff Chiang.

Jim Lee is a renowned comic book artist and the Co-Publisher of DC Entertainment. Prior to his current post, Lee served as Editorial Director, where he oversaw WildStorm Studios. Lee was also the artist for many of DC Comics' best-selling comic books and graphic novels, including All-Star Batman And Robin, The Boy Wonder, Batman: Hush and Superman: For Tomorrow. He also served as the Executive Creative Director for the DC Universe Online (DCUO) massively multiplayer action game from Sony Online Entertainment (SOE). With writer Geoff Johns, Lee drew the flagship title of DC Comics—The New 52, Justice League.
Loading...
or
Not Currently Available for Direct Purchase