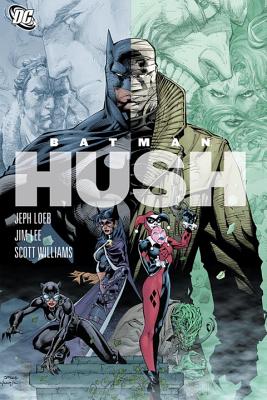 Gotham City’s worst criminals—Joker, Riddler, Ra’s al Ghul, Clayface and others—have emerged to throw Batman’s life into utter chaos. However, these villains are part of a much more elaborate, sinister scheme to destroy the Dark Knight once and for all, one headed by a mastermind much closer to Bruce Wayne than any foe before...

Pushed past his breaking point, Batman will need to use more than the world’s greatest detective skills to unravel the mystery behind this murderous plot before those closest to the Detective suffer the consequences.

In this truly unforgettable story by two of comics’ top talents, writer Jeph Loeb and DC Publisher Jim Lee present the Caped Crusader’s most personal case yet in one of the greatest Batman stories ever told. This volume collects Batman #609-619 as well as the 6-page segment from Wizard #0 and a 2-page origin story that originally appeared at dccomics.com.

"It's beautiful stuff. Catwoman has rarely looked so seductive, nor has Batman's heroic but fearsome image often been used so well. [HUSH] make[s] readers look at Batman and his colleagues with a fresh, enthusiastic eye." —Publishers Weekly, Starred Review

“The art is stunning and beautiful.” —Portland Oregonian

“Jim Lee's art, which just might be his best work in his time at DC Comics.” —IGN

Jeph Loeb is an Emmy award nominated and Eisner award winning writer/producer living in Los Angeles.  In television, his many credits include Smallville, Lost and Heroes and in film, Teen Wolf and Commando. In comics, he is best known for his work with the supremely talented artist and partner-in-crime Tim Sale on Batman: The Long Halloween, Superman For All Seasons, Catwoman: When In Rome for DC as well as Daredevil Yellow, Spider-Man Blue and Hulk Gray for Marvel.

Jim Lee is a renowned comic book artist and the Co-Publisher of DC Entertainment. Prior to his current post, Lee served as Editorial Director, where he oversaw WildStorm Studios and was also the artist for many of DC Comics’ bestselling comic books and graphic novels, including All Star Batman and Robin, The Boy Wonder, Batman: Hush, and Superman: For Tomorrow. He also serves as the Executive Creative Director for the DC Universe Online (DCUO) massively multiplayer action game from Sony Online Entertainment (SOE). As part of DC Comics’ The New 52, Lee is drawing Justice League.
Loading...
or support indie stores by buying on
(This book is on backorder)