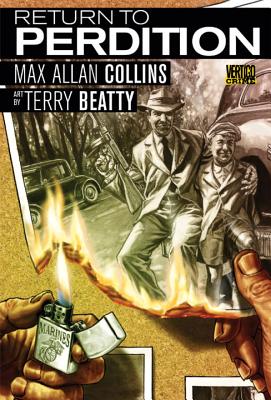 A new chapter in the saga of the O’Sullivan crime family from the acclaimed movie ROAD TO PERDITION.

The time is America in the early 1970’s and our third generation hero, Michael Satariano, Jr. is a Vietnam vet recently returned to the States. He doesn’t know that his father’s real name was Michael O’Sullivan, and is unaware of the confl ict between his dad, his grandfather and John Looney – the criminal godfather of Rock Island, Illinois. But when he’s recruited by the Mob as a hit-man, he’s going to learn the hard way that you can never outrun (or outgun) your past.


Praise For Return to Perdition…

"Beatty's art suggests greater detail in the imagination than the pencils and inks on the page, and his tone, in romance, sex, and violence, beautifully matches the emotional arc of the story. The graphic nature of both the story and the art captures a bleak but powerful tale of someone who doesn't really want redemption"—PUBLISHER'S WEEKLY

MAX ALLAN COLLINS was hailed in 2004 by Publisher's Weekly as "a new breed of writer." A frequent Mystery Writers of America Edgar nominee, he has earned an unprecedented fifteen Private Eye Writers of America Shamus nominations for his historical thrillers, winning for his Nathan Heller novels True Detective (1983) and Stolen Away (1991).

His graphic novel Road to Perdition is the basis of the Academy Award-winning film starring Tom Hanks, directed by Sam Mendes. His many comics credits include the syndicated strip Dick Tracy, his own Ms. Tree and BATMAN.

He has been called "the novelization king" by Entertainment Weekly, with tie-in books on the USA TODAY bestseller list nine times and the New York Times list twice. His movie novels include Saving Private Ryan, Windtalkers, Daylight, I Spy, U.S Marshals, Air Force One, Maverick, U-571, The Mummy, The Mummy Returns and The Scorpion King. He also wrote the prose version of the movie based on his own Road to Perdition. His TV tie-in work includes novels based on CSI: Crime Scene Investigation, NYPD Blue, Dark Angel and Bones.