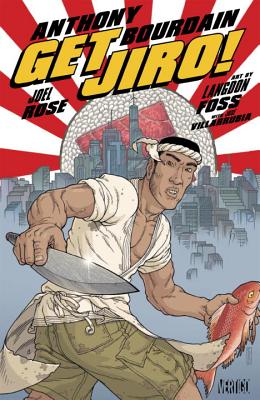 In a not-too-distant future L.A. where master chefs rule the town like crime lords and people literally kill for a seat at the best restaurants, a bloody culinary war is raging.

On one side, the Internationalists, who blend foods from all over the world into exotic delights. On the other, the "Vertical Farm," who prepare nothing but organic, vegetarian, macrobiotic dishes. Into this maelstrom steps Jiro, a renegade and ruthless sushi chef, known to decapitate patrons who dare request a California Roll, or who stir wasabi into their soy sauce. Both sides want Jiro to join their factions. Jiro, however has bigger ideas, and in the end, no chef may be left alive!


Praise For Get Jiro!…

"'Get Jiro!'" unfolds in a dystopian version of Los Angeles where today's (mostly) polite and academic discussions about food have evolved into grisly gastronomic feuds.... In some ways, "Get Jiro!" represents a coming-full-circle thing for Mr. Bourdain."—The New York Times

"What's an ex-yakuza enforcer turned sushi chef to do, ask culinary expert and author Bourdain (Medium Raw) and co-writer Joel Rose (La Pacifica) in this boisterous lampooning of food culture, a pet project for Bourdain, who seems to revel in the unrestrained narrative allowed in a comic book. Their answer will be enjoyable to anyone versed in samurai revenge stories or the films of Sam Peckinpah.... The book's saving grace is the wonderfully clean and detailed art by an all-star team of artists led by illustrator Foss, whose meticulously researched and composed visuals mirror Jiro's precision with a knife and produce equally appetizing results."—Publishers Weekly

"Bourdain...promised 'an ultra-violent slaughter-fest over culinary arcane,' and he delivers pretty much exactly that....Bourdain let's his foodie id run wild, extolling the elegant simplicity of a peasant dish like pot-au-feu here and caving in skulls with sauté pans there.  Foss' stubby, dough-faced figures walk a fine line between goofy and thuggish, and fall apart with great ickiness when dismembered. Equal parts blunt culinary opinion-mongering and satiric takedown of the very same chef-worship culture Bourdain helped create, this amusing diversion coasts comfortably in the wake of the standard bearer of gore-soaked foodie comics..."—Booklist

Born in 1956, Anthony Bourdain graduated from the world-renowned Culinary Institute of America. He began running New York kitchens at restaurants such as Supper Club, One Fifth Avenue, and Sullivan's. His extensive body of work has graced the pages of The Times, New York Times, Observer, the Face, and Scotland on Sunday. He is an ongoing contributor and authority for Food Arts magazine. Bourdain's fictional works include two crime novels- 1997's "Gone Bamboo" and "Bone in the Throat" in 1995. His book "Kitchen Confidential: Adventures in the Culinary Underbelly" was a bestseller, with an updated edition published in 2007. In 2002, the Food Network debuted what would become a twenty-two episode series featuring Bourdain circling the globe and feeding his adventure eating habit with the most extreme cuisine the world had to offer. The inspired bestselling book, "A Cook's Tour In Search of the Perfect Meal," met with huge success in the United Kingdom and the United States.Joel Rose's most recent novel is The Blackest Bird, which has been translated into 13 languages. Previous books include "Kill the Poor, Kill Kill Faster Faster" (both of which have been made into films), and "New York Sawed in Half." For DC Comics, he wrote the graphic novels "La Pacifica" and "The Big Book Of Thugs."
Loading...
or
Not Currently Available for Direct Purchase