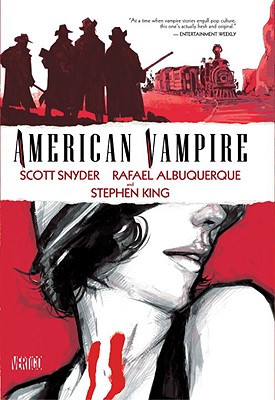 This volume follows two stories: one written by Snyder and one written by King. Snyder's story is set in 1920's LA, we follow Pearl, a young woman who is turned into a vampire and sets out on a path of righteous revenge against the European Vampires who tortured and abused her. This story is paired with King's story, a western about Skinner Sweet, the original American Vampire-- a stronger, faster creature than any vampire ever seen before with rattlesnake fangs and powered by the sun.

Scott Snyder has been published in Zoetrope, Tin House, One-Story, Epoch, Small Spiral Notebook, and other journals. He teaches at Columbia University and Sarah Lawrence University and lives in New York with his wife, Jeanie, and his son, Jack Presley. He's currently at work on a novel for the Dial Press.Stephen King is the bestselling author of The Stand, The Shining, The Dark Tower books and multitudes of other works, most recently Under the Dome. AMERICAN VAMPIRE marks Stephen King's debut with Vertigo/DC Comics; it is the first comic book writing he's done, based on original material, as opposed to existing characters.
Loading...
or
Not Currently Available for Direct Purchase