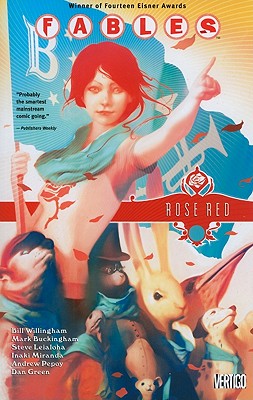 The next collection in the New York Times best selling series.

Rose Red, sister of Snow White, has finally hit rock bottom. Does she stay there, or is it time to start the long, tortuous climb back up? The Farm is in chaos, as many factions compete to fill the void of her missing leadership. And there’s a big magical fight brewing down in the town square, right under her window.

Born in 1966 in the English seaside town of Clevedon, Mark Buckingham has worked in comics professionally for the past twenty years. In addition to illustrating all of Neil Gaiman's run on the post-Alan Moore Miracleman in the early 1990s, Buckingham contributed inks to The Sandman and its related miniseries Death: The High Cost of Living and Death: The Time of Your Life as well as working on various other titles for Vertigo and Marvel through the end of the decade. In 2002 he took over as the penciller for Bill Willingham's Fables, which has gone on to become one of the most popular and critically acclaimed Vertigo titles of the new millennium. When not in Clevedon, Buckingham can be found with his wife Irma in the Asturias region of northern Spain.
or
Buy Here
(This book is on backorder)
Copyright © 2020 American Booksellers Association