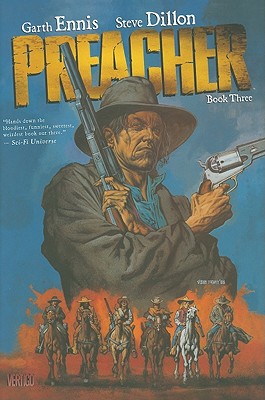 In the continuing saga of the bizarre adventures of faithless Texas preacher Jesse Custer, Jesse, along with his girlfriend Tulip and their friend Cassidy, the Irish vampire, head down South in hopes of recovering from their encounter with the forces of the Grail. But during their planned down time Jesse must face off against an enraged Arseface, who seeks to avenge his father’s death, while Tulip deals with Cassidy’s startling declaration of love for her. Also includes a special story spotlighting the Saint of Killers and the story of Cassidy’s first and only encounter with his fellow vampires.

Garth Ennis has been writing comics for twenty years, initially for British titles like 2000 AD and Crisis, then for various American publishers. As well as PREACHER, his credits include HELLBLAZER, HITMAN, WAR STORY, ADVENTURES IN THE RIFLE BRIGADE, KEV, BATTLER BRITTON, The Boys, Battlefields, Dan Dare, 303, The Chronicles of Wormwood, Crossed, Streets of Glory, Dicks, The Punisher, Fury and The Pro. Originally hailing from Belfast, Northern Ireland, he now resides in New York City with his wife, Ruth.
Loading...
or
Not Currently Available for Direct Purchase