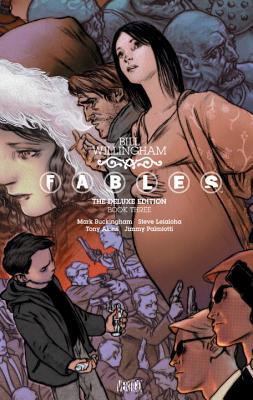 In the latest deluxe FABLES hardcover, Little Red Riding Hood makes a dramatic reappearance, only to clash with Bigby Wolf.

Bill Willingham’s runaway hit series FABLES with this latest volume collecting the series in hardcover for the first time.

When Little Red Riding Hood suddenly walks through the gate between this world and the lost Fable Homelands, she’s welcomed as a miraculous survivor by nearly everyone – everyone except her old nemesis, Bigby Wolf, who smells espionage and subversion – not survival. But will he be able to prove his case before disaster strikes? And how will it all affect Prince Charming’s upstart campaign to become the new mayor of Fabletown?

Born in 1966 in the English seaside town of Clevedon, Mark Buckingham has worked in comics professionally for the past twenty years. In addition to illustrating all of Neil Gaiman's run on the post-Alan Moore Miracleman in the early 1990s, Buckingham contributed inks to The Sandman and its related miniseries Death: The High Cost of Living and Death: The Time of Your Life as well as working on various other titles for Vertigo and Marvel through the end of the decade. In 2002 he took over as the penciller for Bill Willingham's Fables, which has gone on to become one of the most popular and critically acclaimed Vertigo titles of the new millennium. When not in Clevedon, Buckingham can be found with his wife Irma in the Asturias region of northern Spain.

Tony Akins is an accomplished comic book artist who first gained attention for his work on the 1980's comic book series Nexus. He went on to do work for Now Comics and Dark Horse Comics illustrating such well known properties as Star Wars, Aliens, and The Terminator. He did his first work for DC Comics in 2003 on Vertigo projects such as Hellblazer: Papa Midnite and Fables. In 2006 he began a five year run with writers Bill Willingham and Matthew Sturges on the popular monthly series Jack of Fables, a spin-off of Willingham's Fables series. Akins has also worked with writer Brian Azzarello on the Wonder Woman on-going series.
or
Not Currently Available for Direct Purchase
Copyright © 2020 American Booksellers Association