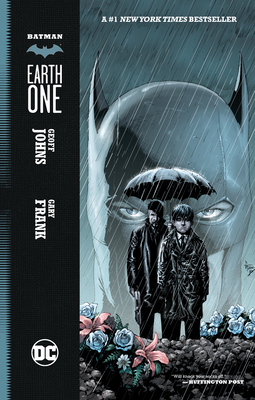 Batman is not a hero.

He is just a man.

In a Gotham City where friend and foe are indistinguishable, Bruce Wayne's path toward becoming the Dark Knight is riddled with more obstacles than ever before. Focused on punishing his parents’ true killers, and the corrupt police that allowed them to go free, Bruce Wayne's thirst for vengeance fuels his mad crusade and no one, not even Alfred, can stop him.

In the tradition of the #1 New York Times bestselling Superman: Earth One, writer Geoff Johns and artist Gary Frank re-imagine a new mythology for the Dark Knight, where the familiar is no longer the expected in this long-awaited original graphic novel from DC Comics.

Geoff Johns is an award-winning writer and one of the most popular contemporary comic book writers today. Johns is the author of The New York Times bestselling graphic novels Aquaman: The Trench, Blackest Night, Green Lantern: Sinestro Corps War, Justice League: Origin, Superman: Brainiac and Batman: Earth One which hit #1 on the bestseller list. He is also known for transforming Green Lantern into one of the most critically and commercially successful franchises in comics.

Johns was born in Detroit and studied media arts, screenwriting, and film at Michigan State University. After moving to Los Angeles, he became an assistant to Richard Donner, director of Superman: The Movie. He and his mentor Donner later co-wrote Superman: Last Son featuring the return of General Zod.

Johns has written for various other media, including episodes of Smallville, Arrow and Adult Swim's Robot Chicken, for which he was nominated along with his co-writers for an Emmy. He is the Chief Creative Officer of DC Entertainment and resides in Los Angeles, California.

Gary Frank, a native of Bristol, England, began his comics career working on various titles for Marvel UK before entering the American comics scene as the penciller on Marvel’s Incredible Hulk. Frank then
came to DC Comics where he was the original artist on BIRDS OF PREY and pencilled the adventures of SUPERGIRL. He has also worked on WildStorm’s GEN 13 as well as his creator-owned series Kin. Frank,
along with writer Geoff Johns, has worked on the bestselling titles SUPERMAN: BRAINIAC, SUPERMAN AND THE LEGION OF SUPER-HEROES and the New York Times #1 bestseller, BATMAN: EARTH ONE.

Praise For Batman: Earth One…

"After successfully re-imagining the Man of Steel in Superman: Secret Origin, Geoff Johns and Gary Frank have unleashed their talents on Bruce Wayne and proven, once again, that under the right stewardship, the Batman legend is endlessly malleable. Alfred as a former Royal Marine. The Penguin as a genuinely creepy and sadistic villain. Awesome."—David S. Goyer, co-writer of Batman Begins, The Dark Knight Rises, and Man of Steel

“For the first time in a long time, you can see Batman's eyes. That may seem like a minor change. It's not. Johns and Frank know that the real appeal of Batman is what hides within him. Now they're letting us take a brand new, breathtaking peek ... inside and out.”—Brad Meltzer

"Just when you thought there couldn't possibly be a fresh take on Batman, along come Johns & Frank to prove you extraordinarily wrong. Original, surprising and emotional, Batman: Earth One is a must-read."—Damon Lidelof, co-creator and executive producer of Lost