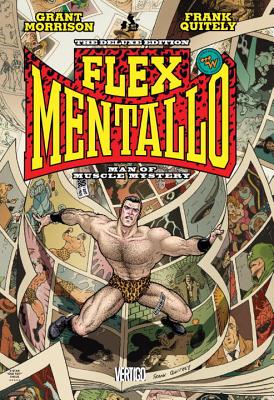 Collected for the first time, an early classic from the ALL-STAR SUPERMAN team of Grant Morrison and Frank Quitely, newly recolored.

Once he was Hero of the Beach . . . and of the Doom Patrol. Now Flex Mentallo, the Man of Muscle Mystery, returns to investigate the sinister dealings of his former comrade, The Fact, and a mysterious rock star whose connection to Flex may hold the key to saving them both.

This fast-paced tale twists super hero tropes, introducing one mind-boggling concept after another in a tour de force of innovative storytelling.

This long-asked-for Vertigo title is collected at last, presenting an early collaboration between writer Grant Morrison and artist Frank Quitely, who would win much acclaim on ALL-STAR SUPERMAN and WE3.

Grant Morrison has been working with DC Comics for twenty years, after beginning this American comics career with acclaimed runs on ANIMAL MAN and DOOM PATROL. Since then, he has written such best-selling series as JLA, BATMAN and New X-Men, as well as creator-owned titles as THE INVISIBLES, SEAGUY, THE FILTH, WE3 AND JOE THE BARBARIAN. Morrison has also expanded the borders of the DC Universe in the award-winning pages of SEVEN SOLDIERS, ALL-STAR SUPERMAN, FINAL CRISIS and BATMAN, INCORPORATED, and he currently reinventing the Man of Steel in the all-new ACTION COMICS.

"A compelling work by one of the best writers of the modern era...Grant Morrison at his metaphysical prime."--iFanboy

"Morrison and Quitely have the magic touch that makes any book they collaborate on stand out form the rest."-MTV's Splash Page