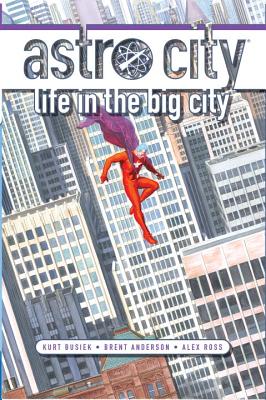 Welcome to Astro City, a shining city on a hill where super heroes patrol the skies. Each chapter in this collection is a standalone story, highlighting different aspects or characters in the Astro City world...

The city’s leading super hero tries to be everywhere at once, and berates himself for every wasted second as he longs for just a moment of his own. A smalltime hood learns a hero’s secret identity, and tries to figure out how to profit from the knowledge. A beat reporter gets some advice from his editor on his first day on the job. A young woman tries to balance the demands of her family with her own hopes and desires. Despite the fantastic settings, the characters in these slice-of-life stories feel like real people, and that gives the stories real power.

The opening arc of the Eisner Award-winning series by Kurt Busiek and Brett Anderson is collected here with new cover art by Alex Ross! Collects issues #1-6 of ASTRO CITY.

Kurt Busiek was born in Boston, Massachusetts. He began writing comics professionally in 1982, selling stories to both DC and Marvel Comics in the same month, both of which appeared the same day. Since then, he’s written series and characters ranging from Mickey Mouse to Vampirella, including Aquaman, Spider-Man, Conan, Iron Man, the Avengers and more. He is best known for the Marvels series and for his co-creation Astro City, both of which have garnered numerous industry awards. He lives in the Pacific Northwest with his wife, Ann, and his two daughters. He spends far too much time on the Internet.
Loading...
or
Not Currently Available for Direct Purchase