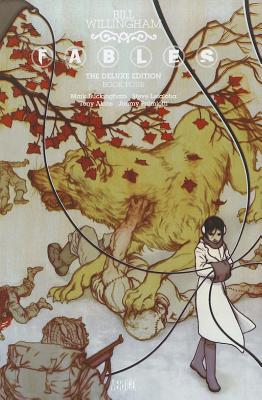 Bill Willingham's hit series FABLES continues here, for the first time in hardcover. In the aftermath of the Adversary's attack on Fabletown, FABLES: THE DELUXE EDITION BOOK 4 follows with the impending birth of Snow White and Bigby Wolf's children! Meanwhile, Boy Blue goes on a mission of revenge, as he discovers the Adversary's true identity.

Born in 1966 in the English seaside town of Clevedon, Mark Buckingham has worked in comics professionally for the past twenty years. In addition to illustrating all of Neil Gaiman's run on the post-Alan Moore Miracleman in the early 1990s, Buckingham contributed inks to The Sandman and its related miniseries Death: The High Cost of Living and Death: The Time of Your Life as well as working on various other titles for Vertigo and Marvel through the end of the decade. In 2002 he took over as the penciller for Bill Willingham's Fables, which has gone on to become one of the most popular and critically acclaimed Vertigo titles of the new millennium. When not in Clevedon, Buckingham can be found with his wife Irma in the Asturias region of northern Spain.
or
Not Currently Available for Direct Purchase
Copyright © 2020 American Booksellers Association