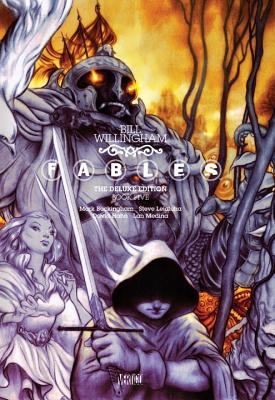 Bill Willingham's hit series FABLES continues here, for the first time in hardcover. In the aftermath of the Adversary's attack on Fabletown, FABLES: THE DELUXE EDITION BOOK 5 follows Boy Blue on a mission of revenge as he uncovers the Adversary's true identity! Plus, the 2-part story of Jack's adventures in Hollywood and the one-shot story of Mowgli's return to Fabletown.

Bill Willingham is the award-winning writer and creator of FABLES. He has been writing, and sometimes drawing, comics for more than twenty years on titles including Elementals, Coventry, PROPOSITION PLAYER and FABLES. With Matthew Sturges, Bill co-wrote the FABLES spinoff JACK OF FABLES, as well as HOUSE OF MYSTERY and JUSTICE SOCIETY OF AMERICA. His work has been nominated for many awards, including the Eisner, Harvey and Ignatz comic industry awards, plus the International Horror Guild award.
or
Not Currently Available for Direct Purchase
Copyright © 2020 American Booksellers Association