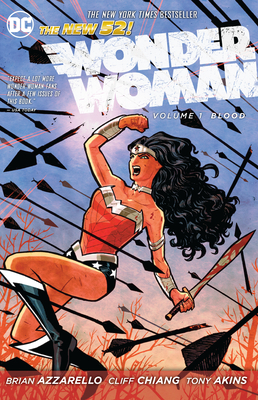 Wonder Woman’s world is shattered when a secret her mother, Hippolyta, queen of the Amazons, kept all her life is revealed: Diana is not clay brought to life, but is in fact the child of Zeus!

In this reimagining of Diana’s history, superheroics and mythology seamlessly blend as Brian Azzarello (JOKER, 100 BULLETS) creates a new direction for one of the world’s best-known heroes. With stunning art by Cliff Chiang and Tony Akins, Wonder Woman has never looked better.

Nuanced and bold, this new beginning of the iconic character is considered one of the greatest stories in the history of the Amazon Warrior. WONDER WOMAN VOLUME 1: BLOOD—the critically acclaimed and best-selling series—collects issues #1-6 from the New 52 era.

“This is clear storytelling at its best….It’s an intriguing concept and easy to grasp. The reader doesn’t need to know that much about Wonder Woman because she is, well, Wonder Woman.” —The New York Times

“Azzarello is crafting a highly-intelligent, and surprisingly gory, affair that's drenched in Greek mythology and godly mischief. And if that's not enough, artist Cliff Chiang simply kills it on every panel he touches. Put your presumptions aside because this is actually a Wonder Woman book worth reading.” —Complex Magazine

“Beautifully illustrated and brings a fresh, fascinating and fun take to the Amazon Princess and her world.” —IGN

“It’s a different direction for Wonder Woman, but one still steeped in mythology...great things from Azzarello and Chiang.” —A.V. Club

“This book is weird and worth your while.” —io9

“It’s the kind of writing that’s made Azzarello such a sought after comic book author.” —Crave Online

“Brian Azzarello is going for a much more horror-oriented book than previous incarnations, and that works well with Cliff Chiang’s art. In fact, they’re probably one of the best paired teams for the New 52 so far.” —Comic Book Resources

Brian Azzarello is the writer and co-creator of the award-winning Vertigo series 100 BULLETS.  Azzarellos's other writing credits for DC Comics include the graphic novel JOKER, as well as BATMAN: BROKEN CITY, LEX LUTHER: MAN OF STEEL, and HELLBLAZER. Brian has been featured in ENTERTAINMENT WEEKLY, THE CHICAGO TRIBUNE and other publications.
Loading...
or
Not Currently Available for Direct Purchase