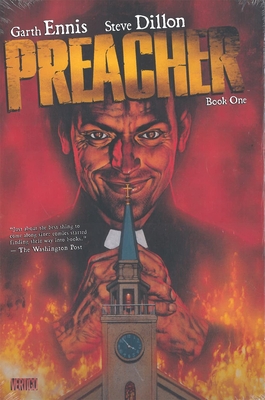 In this now-legendary graphic novel series that serves as the inspiration for the hit AMC television series, Jesse Custer was just a small-town preacher in Texas... until his congregation was flattened by powers beyond his control and the Preacher became imbued with abilities beyond anyone's understanding.

Now possessed by Genesis—the unholy coupling of an angel and demon—Jesse holds Word of God, an ability to command anyone or anything with a mere utterance. And he’ll use this power to hold the Lord accountable for the people He has forsaken.

From the ashes of a small-town church to the bright lights of New York City to the backwoods of Louisiana, Jesse Custer cuts a righteous path across the soul of America in his quest for the divine—an effort that will be met by every evil that Heaven and Earth can assemble. Joined by his gun-toting girlfriend, Tulip, and the hard-drinking Irish vampire, Cassidy, Jesse will stop at nothing to fulfill his quest to find God.

The creative powerhouse team of Garth Ennis and Steve Dillon bring readers on a violent and riotous journey across the country in this award-winning Vertigo series, beginning with Preacher Book One. Collects issues #1-12.

Praise For Preacher Book One…

"It will restore your faith. In comics."—The New York Daily News

Irish-born writer Garth Ennis is the acclaimed author of the Preacher graphic novel series, and also has written numerous John Constantine/Hellblazer graphic novels, as well as The Authority, The Boys, War Stories, Pride And Joy and other titles.
Loading...
or support indie stores by buying on