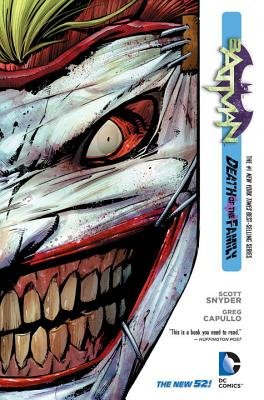 The first printing of this new hardcover will feature a special acetate dust jacket showcasing the face of The Joker.

After having his face sliced off one year ago, the Joker makes his horrifying return to Gotham City! But even for man who's committed a lifetime of murder, he's more dangerous than ever before. How can Batman protect his city and those he's closest to? It all leads back to Arkham Asylum...

This new hardcover collects the critically acclaimed tale DEATH OF THE FAMILY from the superstar #1 New York Times best-selling team of writer Scott Snyder and artist Greg Capullo. BATMAN VOLUME 3 will have repercussions that will affect the Batman universe for years to come!

Scott Snyder is the bestselling and award-winning writer of Batman, American Vampire and Swamp Thing as well as the short story collection Voodoo Heart.  He teaches writing at Sarah Lawrence College, NYU and Columbia University. He lives on Long Island with his wife, Jeanie, and his sons Jack and Emmett.  He is a dedicated and un-ironic fan of Elvis Presley.

"This is a book you need to read. Whether you're a fan of comics or not. If you're a fan of good storytelling and can buy into the conceit that a man dressed as a bat can make a difference in the world, then there's no better book for you than this one."—Huffington Post

"One of the best Batman runs in the history of the character. The fact that two of the biggest names in the industry are handling the return of the Joker is just icing on the cake."—IGN
or
Not Currently Available for Direct Purchase
Copyright © 2020 American Booksellers Association