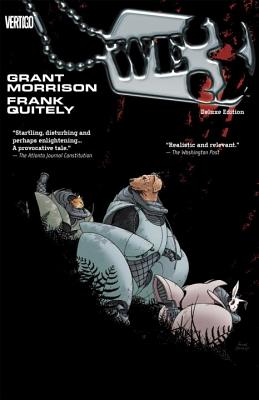 Writer Grant Morrison and artist Frank Quitely deliver the emotional journey of WE3 - three house pets weaponized for lethal combat by the government - as they search for "home" and ward off the shadowy agency that created them.

With nervous systems amplified to match their terrifying mechanical exoskeletons, the members of Animal Weapon 3 (WE3) have the firepower of a battalion between them. But they are just the program's prototypes, and now that their testing is complete, they're slated to be permanently "decommissioned," causing them to seize their one chance to make a desperate run for freedom. Relentlessly pursued by their makers, the WE3 team must navigate a frightening and confusing world where their instincts and heightened abilities make them as much a threat as those hunting them - but a world, nonetheless, in which somewhere there is something called "home."

Grant Morrison has been working with DC Comics for more than twenty years, beginning with his legendary runs on the revolutionary titles ANIMAL MAN and DOOM PATROL. Since then he has written numerous best-sellers — including JLA, BATMAN and New X-Men — as well as the critically acclaimed creator-owned series THE INVISIBLES, SEAGUY, THE FILTH, WE3 and JOE THE BARBARIAN. Morrison has also expanded the borders of the DC Universe in the award-winning pages of SEVEN SOLDIERS, ALL-STAR SUPERMAN, FINAL CRISIS and BATMAN, INC., and he is currently reinventing the Man of Steel in the all-new ACTION COMICS.
In his secret identity, Morrison is a “counterculture” spokesperson, a musician, an award-winning playwright and a chaos magician. He is also the author of the New York Times best-seller Supergods, a groundbreaking psycho-historic mapping of the superhero as a cultural organism. He divides his time between his homes in Los Angeles and Scotland.
Loading...
or support indie stores by buying on
(This book is on backorder)