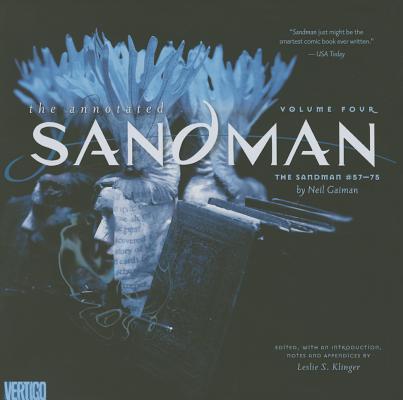 The Sandman is one of the most acclaimed titles in the history of comics. A rich blend of modern myth and dark fantasy in which contemporary fiction, historical drama and legend are seamlessly interwoven, The Sandman is also widely considered to be one of the most original and artistically ambitious comic books of the modern age. By the time it concluded in 1996, it had made significant contributions to the artistic maturity of comics as a whole and had become a pop culture phenomenon in its own right. Critics and readers alike agreed: The Sandman proved that comic books were not simply a genre but were instead a rich and unique medium combining both art and literature.

Now, DC Comics is proud to present this literary classic in an all-new Annotated Edition format. Edited with notes by Leslie S. Klinger, The Annotated Sandman is a page-by-page, panel-by-panel journey through every installment of The Sandman. Using the original comic book scripts and hours of conversations with Gaiman himself, Klinger presents a wealth of commentary, references, and hidden meanings that deepen and enrich our understanding of the acclaimed series. This fourth volume, comprising issues #57-75, completes the title’s original run and features an all-new set of appendices, including a detailed chronology of the events of The Sandman and an exhaustive index of all of its unforgettable characters.

Neil Gaiman is the NEW YORK TIMES best-selling author of AMERICAN GODS and CORALINE.  His other books include the novels ANANSI BOYS, NEVERWHERE and STARDUST (winner of the American Library Association's Alex Awards as one of 2000's top ten adult novels for young adults) and the short fiction collections M IS FOR MAGIC, FRAGILE THINGS and SMOKE AND MIRRORS. With Roger Avary, he is the screenwriter of the motion picture BEOWULF (Paramount, November 2007), direct by Robert Zemeckis.  His illustrated novel STARDUST was released as a major motion picture Summer 2007 starring Michelle Pfeiffer and Robert De Niro.  With Terry Pratchett, he is the author of the novel GOOD OMENS.  He is also the author of the children's books THE WOLVES IN THE WALLS and THE DAY I TRADED MY DAD FOR TWO GOLDFISH. Among his many awards are the Eisner, Hugo, the Nebula, the World Fantasy and the Bram Stoker.  Originally from England, Gaiman now lives in the United States.
Loading...
or support indie stores by buying on
(This book is on backorder)