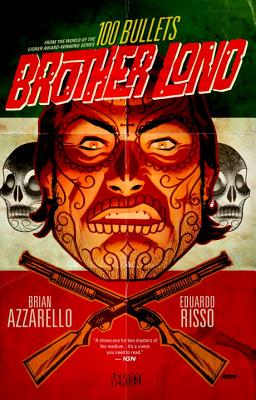 Brother Lono: From the World of the Eisner Award-Winning Series

The Eisner award-winning team behind 100 BULLETS--writer Brian Azzarello and artist Eduardo Rissoe, reunites to tell the story of the baddest Minuteman of all. When last we saw Lono in 100 BULLETS, Dizzy Cordova had shot him through the chest ... but Lono always was too tough to die. Now, after the final events of 100 BULLETS, Lono finds himself in Mexico working on the side of the angels.

Collects the entire eight-issue run of this limited series.

Praise For 100 Bullets: Brother Lono: From the World of the Eisner Award-Winning Series…

"100 Bullets: Brother Lono #1 is brilliant. Right out of the gate, the pacing, the art, the dialogue, all of it feels like a visit to a long lost friend."—IGN

Brian Azzarello has been writing comics professionally since the mid-1990s. He is the author of JONNY DOUBLE, BATMAN: BROKEN CITY and the Harvey and Eisner Award-winning 100 BULLETS, all created in collaboration with artist Eduardo Risso. The New York Times best-selling author's other work for DC includes the titles HELLBLAZER and LOVELESS (both with Marcelo Frusin), SUPERMAN: FOR TOMORROW (with Jim Lee), JOKER and LUTHOR (both with Lee Bermejo), SGT. ROCK: BETWEEN HELL AND A HARD PLACE (with Joe Kubert), FILTHY RICH (with Victor Santos), and most recently the all-new ongoing series WONDER WOMAN (with Cliff Chiang). He also wrote the Richard Corben-illustrated graphic novels Cage and Banner for Marvel Comics. Azzarello lives in Chicago with his wife, artist Jill Thompson, and twitters only when he has something to say.
Loading...
or
Not Currently Available for Direct Purchase