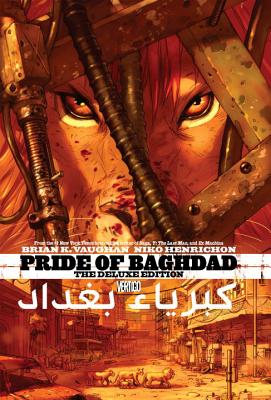 The startlingly original look at life on the streets of Baghdad during the Iraq War inspired by true events arrives in a stunning new softcover edition. In this provocative graphic novel, superstar comics writer Brian K. Vaughan examines life on the streets of war-torn Iraq. In the spring of 2003, a pride of lions escaped from the Baghdad Zoo during an American bombing raid. Lost and confused, hungry but finally free, the four lions roamed the decimated streets of Baghdad in a desperate struggle for their lives. In documenting the plight of the lions, PRIDE OF BAGHDAD raises questions about the true meaning of liberation: Can it be given, or is it earned only through self-determination and sacrifice? And in the end, is it truly better to die free than to live life in captivity? This moving graphic novel is inspired by true events.

Brian K. Vaughan is the Eisner Award-winning co-creator of the critically acclaimed comics series Y: THE LAST MAN and EX MACHINA. He also co-created the Vertigo graphic novel PRIDE OF BAGHDAD and served as a writer and producer for the hit television series Lost. He is currently writing the bestselling Image Comics series Saga and the online comics series The Private Eye, and is the showrunner and executive producer of the hit CBS television series "Under the Dome," based on the bestselling novel by Stephen King.

"Lavishly drawn, and devastating...Vaughan has his marvelously imagined characters debate the concept of freedom versus desire for safety...the total effect is memorable."--PUBLISHERS WEEKLY, starred★

"This is an important work, strongly recommended for all adult collections."--LIBRARY JOURNAL, starred★

"Seems destined to cement the reputation of Brian K. Vaughan as one of the best writers to grace the medium in many years."--VARIETY

"Destined to cement the reputation of Brian K. Vaughan as one of the best writers to grace the medium.--VARIETY

"A brightly colored tragedy, Pride of Baghdad is as unblinking as the perils faced every day in the real Iraq."--USA TODAY

"This is an important work, strongly recommended for all adult collections."--LIBRARY JOURNAL starred★

"You can put it right next to Watchmen. It's that good."--IGN
or
Not Currently Available for Direct Purchase
Copyright © 2020 American Booksellers Association