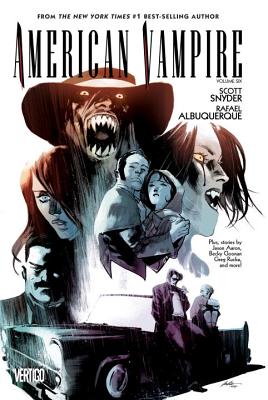 You are cordially invited to a party--to die for! This volume of American Vampire collects eight amazing stories set in the world of American Vampire, with "lost tales," new characters and old favorites. Don't miss these stories brought to you by series creators Scott Snyder and Rafael Albuquerque, as well as other awesome comics talent like Becky Cloonan (BATMAN), Gabriel Ba and Fabio Moon (DAYTRIPPER), Jeff Lemire (SWEET TOOTH), Greg Rucka (The Punisher, BATWOMAN), Gail Simone (BATGIRL) and many more! Also collected here is the stand alone tale of Fan-favorite character Travis Kidd--the vampire hunter who likes to "bite them back" in AMERICAN VAMPIRE: THE LONG ROAD TO HELL.

"Looking for a vampire story with some real bite? Then, boys and girls, Scott Snyder has a comic book for you"—USA WEEKEND

"American Vampire continues to be one of the most exciting, bold and horrific new series"—BUZZFOCUS

"One hell of a satisfying package . . . a rich, textured romp through vampire Americana, in such a fun way as to suggest the possibilities of this vehicle are as endless as the lives of the undead."—IGN

Scott Snyder is the bestselling and award-winning writer of Batman, Superman: Unchained, American Vampire and Swamp Thing as well as the short story collection Voodoo Heart.  He teaches writing at Sarah Lawrence College, NYU and Columbia University. He lives on Long Island with his wife, Jeanie, and his sons Jack and Emmett.  He is a dedicated and un-ironic fan of Elvis Presley.
Loading...
or
Not Currently Available for Direct Purchase