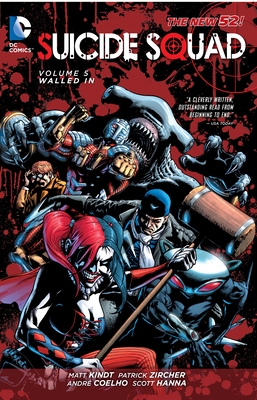 Our world belongs to the Crime Syndicate!

With Forever Evil sweeping across the DC Universe, the Suicide Squad find themselves in a world full of villians now free from their shackles -- Belle Reve! And now with the Reverse Suicide Squad taking over Belle Reve, Amanda Waller and James Gordon Jr. must free a mysterious prisoner from the early days of the New 52 if they are to have any hope of surviving! From new writer Matt Kindt comes the Squad's deadliest mission yet! Collects issues #24-30.

"A cleverly written, outstanding read from beginning to end, especially for those non-comic fans who dig action and horror movies."--USA Today

"The artwork is garish and the story is dark and brutal--but that's a good thing--Suicide Squad has a certain appeal because of those qualities."--Publishers Weekly

"A pretty irresistible hook. What if the good guys assembled a bunch of bad guys to work as a Dirty Dozen-like superteam and do the dirty work traditional heroes would never touch (or want to know about)?"--The Onion/A.V. Club

"Suicide Squad provides a nice, chaotic backdrop that doubles as fuel, propelling the story to wonderfully bizarre places as Kindt pours the action into "Suicide Squad."--CBR

Matt Kindt is the Harvey Award winning writer and artist of the comics and graphic novels MIND MGMT, Frankenstein: Agent of S.H.A.D.E., Revolver, 3 Story, Super Spy, 2 Sisters, and Pistolwhip. He has been nominated for 4 Eisner and 3 Harvey Awards (and won once). His work has been published in French, Spanish, Italian, and German.