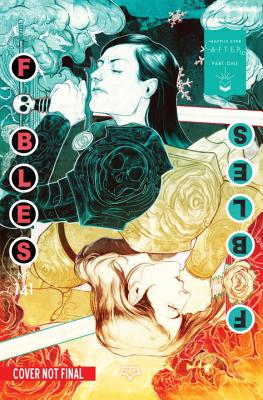 In the aftermath of Bigby Wolf’s destruction, a shift in the Fables’ underlying power structure threatens to split their community into two warring factions - one led by Snow White, the other by her sister Rose Red. Accelerating this process are the machinations of an unsuspected enemy within, who brings Bigby back from the dead with all of his lethal power but with none of his redeeming humanity.

After thirteen years and tales beyond counting, the saga of Fabletown is drawing to a close - but it’s not going gentle into that good night. With HAPPILY EVER AFTER, the creative juggernaut of Bill Willingham, Mark Buckingham, Steve Leialoha and Andrew Pepoy are joined by an armada of special guest talents - including Matthew Sturges, Eric Shanower, Shawn McManus, Jae Lee, Terry Moore, Russ Braun and Chrissie Zullo - for the penultimate chapter in the celebrated FABLES chronicles! Collects issues #141-149.

Praise For Fables Vol. 21: Happily Ever After…

"Clever, enjoyable . . . an excellent series in the tradition of SANDMAN, one that rewards careful attention and loyalty."PUBLISHERS WEEKLY

"One of the best damn series ever written."–AIN'T IT COOL NEWS

Bill Willingham has been writing, and sometimes drawing, comics for more than twenty years. During that time he's had work published by nearly every comics publisher in the business and he's created many critically acclaimed comic book series, including Elementals, Coventry, PROPOSITION PLAYER and of course the seminal Vertigo series FABLES, as well as its spin-off series FAIREST, JACK OF FABLES and THE LITERALS. His work has been nominated for many awards, including the Eisner, Harvey and Ignatz comic industry awards and the International Horror Guild award. He lives somewhere near a good poker room.
Loading...
or
Not Currently Available for Direct Purchase