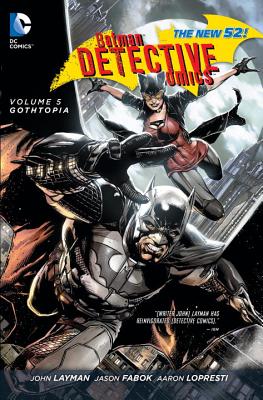 Gotham City is and always has been a crime-free utopia, where the heroes are celebrated through the streets of one of America's best cities. Batman is a universally beloved vigilante clad in white. His sidekick is Selina Kyle, otherwise known as Catbird. Who--or what--has created the Dark Knight's alternate hometown?

"This is your go-to book."--Entertainment Weekly

"Detective Comics is head-spinningly spectacular from top to bottom."--MTV Geek

"The start to something truly great."--IGN

"A perfect transition into the medium."--Complex Magazine

Once an editor for Wildstorm, John Layman turned to writing comics full-time in 2002 and mainly wrote for Marvel Comics. However, he is mostly known for his creator-owned titles at Image Comics, such as the graphic novel Puffed and the Eisner and Harvey Award-winning series Chew. He currently writes the monthly adventures of the Dark Knight in DETECTIVE COMICS.
Loading...
or support indie stores by buying on
(This book is on backorder)