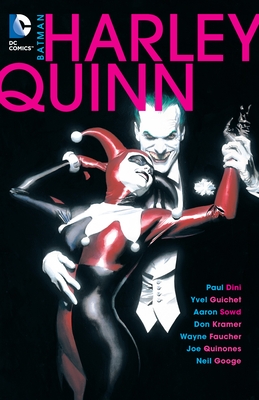 Head over heels in her devotion to the Joker, Arkham psychiatrist Harleen Quinzel gave up her career (and her sanity) to transform herself into the ultimate companion for crime’s clown prince - the mad moll Harley Quinn.

Of course, Harley’s romance with the Joker hasn’t been easy. The two are at each other throats as often as in each other’s arms, and that buzzkill Batman is always sticking his nose in just when things are starting to get fun. But what great love story is without the occasional incarceration and life-threatening peril?

Paul Dini is a multiple Emmy and Eisner Award-winning writer and producer who has helped redefine the legends of the DC Universe in such series as The New Batman/Superman Adventures, Batman Beyond, Krypto and Justice League Unlimited. In comics he has authored THE WORLD'S GREATEST SUPER-HEROES, illustrated by Alex Ross. Dini has also collaborated with Chip Kidd on Batman Animated for HarperCollins.
Loading...
or
Not Currently Available for Direct Purchase