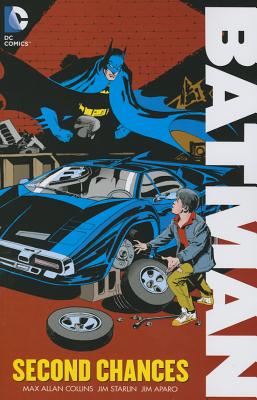 The Dark Knight. The Boy Wonder. The Dynamic Duo. Together, Batman and Robin have kept the streets of Gotham City safe-while the boy beneath the mask, Dick Grayson, has kept Bruce Wayne from a lonely life of brooding darkness. But when a bullet fired from the Joker’s gun nearly clips Robin’s wings for good, their partnership is severed, and Batman resumes his war on crime alone.

But he’s not alone for long.

When Batman first meets a tough kid named Jason Todd, the boy is more criminal than crimefighter. But from that first encounter, a powerful new bond is forged. The Dark Knight sees Jason’s potential to be a hero-as well as the rage and revenge that torment him.

The Batman has found his new Robin. Can Gotham’s greatest hero help his protege fly right?

MAX ALLAN COLLINS was hailed in 2004 by Publisher's Weekly as "a new breed of writer." A frequent Mystery Writers of America Edgar nominee, he has earned an unprecedented fifteen Private Eye Writers of America Shamus nominations for his historical thrillers, winning for his Nathan Heller novels True Detective (1983) and Stolen Away (1991).

His graphic novel Road to Perdition is the basis of the Academy Award-winning film starring Tom Hanks, directed by Sam Mendes. His many comics credits include the syndicated strip Dick Tracy, his own Ms. Tree and BATMAN.

He has been called "the novelization king" by Entertainment Weekly, with tie-in books on the USA TODAY bestseller list nine times and the New York Times list twice. His movie novels include Saving Private Ryan, Windtalkers, Daylight, I Spy, U.S Marshals, Air Force One, Maverick, U-571, The Mummy, The Mummy Returns and The Scorpion King. He also wrote the prose version of the movie based on his own Road to Perdition. His TV tie-in work includes novels based on CSI: Crime Scene Investigation, NYPD Blue, Dark Angel and Bones.
or
Not Currently Available for Direct Purchase
Copyright © 2020 American Booksellers Association