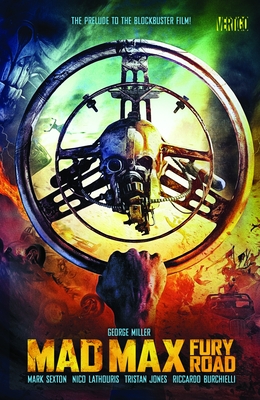 Fury Road: The Prelude to the Blockbuster Film!

In the brutal and lawless Wasteland, witness the rise of the veteran hero turned tyrannical warlord known as Immortan Joe, along with the story of one of his War Boys, the indomitable Nux. Then follow the journey of Furiosa, Joe’s most feared Imperator, and experience the cycle of violence and tragedy as the Road Warrior Max Rockatansky fights to rebuild his Interceptor-the vehicle that ensures his freedom!

Finally, exclusive to this collection, comes the tale of the mighty War Rig and the lives it claimed throughout its wild road battles!

A native of Australia, George Miller made his feature film directing/writing debut with the international success Mad Max (1979), starring Mel Gibson. For his efforts, Miller received AFI nominations for Best Director and Best Original Screenplay. Miller released his Mad Max reboot in 2015, which was almost six years in the making. Mad Max: Fury Road stars Tom Hardy alongside Charlize Theron and Nicholas Hoult. He also has written the comic book adaptation of the film for Vertigo/DC Comics.
or support indie stores by buying on
Copyright © 2020 American Booksellers Association