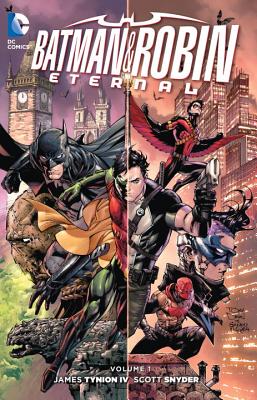 Bruce Wayne may no longer be Batman, but his legacy lives on. When an assassin begins targeting all of Batman’s past partners, the former Robins must join forces to untangle a mystery that stretches back to the early days of the Dark Knight’s career.

Years ago, Batman encountered a human trafficker known as Mother. Then-Robin Dick Grayson knew nothing of it at the time, but the case was much more complex than he could have ever imagined. Now, without Bruce to guide them, a grown-up Grayson and his allies must rely on the help of the silent, mysterious Cassandra Cain to pick up the trail and stop Mother’s deadly plans.

But with Mother’s army of sleeper agents all around, they can’t trust anyone—even each other!
Collects BATMAN AND ROBIN ETERNAL #1-13.

“It's hard not to feel excited when you see a book that looks and reads as good as Batman and Robin Eternal.”—Newsarama

“Humming along with solid dialogue and fun banter, showing readers why these books have the best extended cast of characters in mainstream comic books today.”—Comic Book Resources

“Daniel’s renderings are slick, classic and easy on the eyes.”—Paste Magazine

Scott Snyder is one of comics' best young writers. His current works include BATMAN, SUPERMAN UNCHAINED, AMERICAN VAMPIRE and SWAMP THING. He has also been published in Zoetrope, Tin House, One-Story, Epoch, Small Spiral Notebook and other journals, and has a short story collection, Voodoo Heart, which was published by Dial Press. He teaches at Columbia University and Sarah Lawrence College and lives in New York with his wife, Jeanie, and his son, Jack Presley.
Loading...
or
Not Currently Available for Direct Purchase