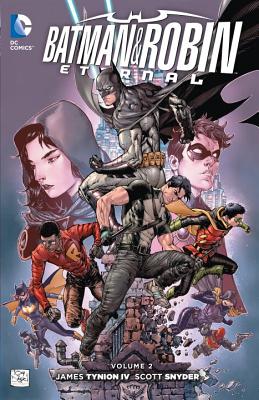 Beware of Mother. She deals in custom-created humans, taking children who’ve lived through unspeakable tragedies and turning them into weapons or worse. And when Batman couldn’t stop her, what happened instead became his greatest shame…and his greatest secret.

Now, Batman is gone. But the heroes who carry on his legacy—Dick Grayson, Red Hood, Red Robin, Bluebird and Cassandra Cain—find Mother’s fingers tightening around their throats. While Red Hood and Red Robin attempt to extract the secret of Mother’s newest weapon from the Order of St. Dumas and its avenger, the deadly Azrael, Dick and Bluebird set out to rescue Cassandra from her father, the assassin Orphan.

“…it's hard not to feel excited when you see a book that looks and reads as good as BATMAN AND ROBIN ETERNAL.” – Newsarama

“…the book establishes itself as the one place to see the best parts of the Bat Universe interact with one another.” – Comic Book Resources

Scott Snyder is a #1 New York Times best-selling writer and one of the most critically accalimed scribes in all of comics. His works include Batman, Batman Eternal, Superman Unchained, American Vampire and Swamp Thing.  He has also been published in Zoetrope, Tin House, One-Story, Epoch, Small Spiral Notebook, and other journals, and has a short story collection, Voodoo Heart, which was published by Dial Press. He teaches at Columbia University and Sarah Lawrence University and lives in New York with his wife, Jeanie, and his son, Jack Presley.
Loading...
or
Not Currently Available for Direct Purchase