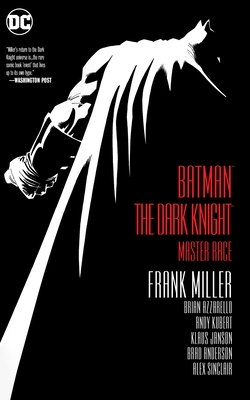 One of the most highly anticipated sequels of all-time is finally here in BATMAN: THE DARK KNIGHT: MASTER RACE!

In 1986, Frank Miller introduced his iconic take on Batman and changed the face of comics forever. Now, three decades after BATMAN: THE DARK KNIGHT RETURNS, Miller himself has returned with a third chapter to his groundbreaking saga.

It’s been three years since the Batman defeated Lex Luthor and saved the world from tyranny. Three years since anyone has seen Gotham City’s guardian alive. Wonder Woman, Queen of the Amazons…Hal Jordan, the Green Lantern…Superman, the Man of Steel…all of the Dark Knight’s allies have retreated from the front lines of the war against injustice.

But now a new war is beginning. An army of unimaginable power led by Superman’s own daughter is preparing to claim Earth as their new world.

The only force that can stop this master race—Batman—is dead.

"Batman, Superman, Wonder Woman and other heroes are back on the page showcasing Miller's distinctive flavor." —USA Today

"Frank Millers's return to the DARK KNIGHT universe is not only an all-star collaboration, but also the rare comic-book "event" that lives up to its own hype." —Washington Post

"It's hard to resist a comic that features the talents of Frank Miller, Klaus Janson, Brian Azzarello, and Andy Kubert. Alone, any one of these guys could sell a comic. With their powers combined? It's insane. Enjoy the ride, because Dark Knight III: The Master Race is pretty damn good." —Nerdist

"Recapturing much of the original's unique visual flavor." —IGN

Frank Miller began his career in comics in the late 1970s and rose to fame while first drawing, and then writing, Daredevil for Marvel Comics. He was also the creative force behind BATMAN: THE DARK KNIGHT RETURNS, BATMAN: YEAR ONE and BATMAN: THE DARK KNIGHT STRIKES AGAIN. His many works have not only redefined classic characters, but also, on a few occasions, revitalized the comics industry. His multi-award-winning graphic novel 300 was brought to full-blooded life in the 2007 motion picture of the same name, and in 2008 he directed the feature film Will Eisner's The Spirit. His creator-owned crime saga Sin City first hit the page in 1991, and then the silver screen in 2005, with Miller on board as co-director with Robert Rodriguez. The two returned to direct the sequel Sin City: A Dame to Kill For, released in 2014 and featuring two new stories by Miller. In 2015, Miller returned to his best-selling series with the highly anticipated BATMAN: THE DARK KNIGHT: MASTER RACE.
Loading...
or support indie stores by buying on