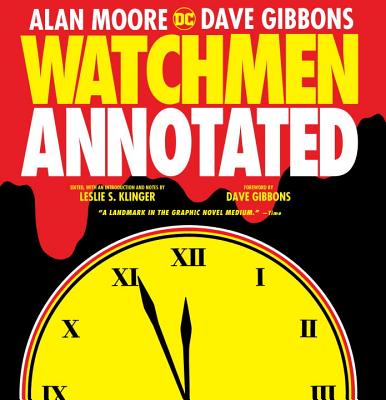 DC Comics is proud to present an all-new retrospective edition of one of the greatest graphic novels ever in WATCHMEN: THE ANNOTATED EDITION. This book examines each of the series’ twelve issues in unprecedented detail, moving page by page and panel by panel to reveal the hidden foundations of this milestone in modern storytelling.

Edited with notes by Leslie S. Klinger, this new edition draws upon critical and scholastic commentary, in-depth interviews with Dave Gibbons, and previously unseen original source material, all printed in black and white. Klinger provides the reader with a unique and comprehensive view of WATCHMEN as both a singular artistic achievement and a transformative event in the history of comics as a medium.

Set in a world in which history has been forever altered by the existence of superheroes, Alan Moore and Dave Gibbons’ monumental graphic novel WATCHMEN is one of the most influential comic book series of all time. Following two generations of masked crime-fighters from the end of World War II to the height of the Cold War, this compelling tale unfolds from a simple murder mystery into an epic saga of power, corruption and the ultimate meaning of humanity.

More than 30 years after it was first published, Moore and Gibbons’ masterpiece continues to inspire and entertain readers around the world. Named one of Time magazine’s 100 best English-language novels of the 20th century, WATCHMEN has won countless critical accolades and honors, including the Eisner Award and the Hugo Award.

Alan Moore is perhaps the most acclaimed writer in the graphic story medium, having garnered countless awards for works such as WATCHMEN, V FOR VENDETTA, From Hell, Miracleman and SWAMP THING. He is also the mastermind behind the America's Best Comics line, through which he has created (along with many talented illustrators) THE LEAGUE OF EXTRAORDINARY GENTLEMEN, PROMETHEA, TOM STRONG, TOMORROW STORIES and TOP 10. As one of the medium's most important innovators since the early 1980s, Moore has influenced an entire generation of comics creators, and his work continues to inspire an ever-growing audience. Moore resides in central England.
Loading...
or
Not Currently Available for Direct Purchase