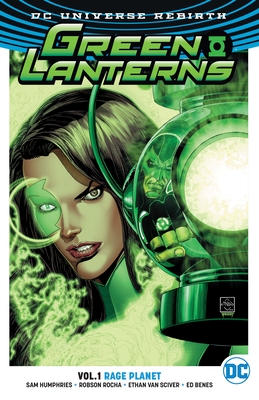 One is all impulse. The other, all anxiety. Together, they put the “green” in Green Lantern.

Simon Baz and Jessica Cruz are the latest recruits to the Green Lantern Corps. They’ve proven themselves capable of overcoming great fear alongside the Corps and the Justice League alike. Now Hal Jordan himself has assigned them the task of protecting the planet. But they’re still new to the job, with very little experience and a whole lot to prove.

That makes them the perfect targets.

One of the Green Lanterns’ greatest enemies has returned, and he has the Earth in his sights. He is Atrocitus, the tyrannical leader of the Red Lanterns, and he means to infect the entire planet with his murderous red rage.

Can Jessica and Simon overcome their differences and wield the Green Lantern’s light like true partners? Or will these rookies’ rage help the Red Lanterns extinguish that light for good?

Sam Humphries is a comic book writer living in Los Angeles. In 2013, Humphries launched a new Avengers comic called AVENGERS A.I., and relaunched UNCANNY X-FORCE as part of the blockbuster MARVEL NOW! initiative. His work for BOOM! Studios includes HIGHER EARTH and FANBOYS VS. ZOMBIES. He has also created the critically-acclaimed indie hits OUR LOVE IS REAL and SACRIFICE, the latter of which will was re-released in a deluxe hardcover edition by Dark Horse Comics. He is now writing GREEN LANTERNS for DC Comics.

“…it’s hard not to walk away impressed.”—IGN

“Jessica Cruz is the swift kick in the pants that this franchise needed.”—Newsarama
or support indie stores by buying on
(This book is on backorder)
Copyright © 2020 American Booksellers Association