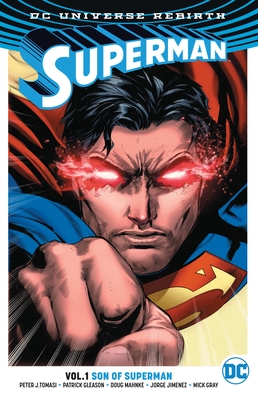 A great new starting point for the Man of Steel is here in Superman Vol. 1: Son of Superman, part of the most critically acclaimed, best-selling line of volume one graphic novels, DC Universe Rebirth!

When the Man of Steel died defending his adopted home, it seemed that the spirit of truth and justice he represented was extinguished forever. But watching from the sidelines was another Superman—older, wiser, more experienced—with his wife, Lois Lane, and their son, Jonathan Kent.

Now this refugee from a vanished universe is stepping out of the shadows, ready to assume the mantle of his fallen counterpart and take to the skies once more as Earth’s greatest hero.

But he is not the only survivor of Krypton to make the journey to this reality.

The machine mind known as the Eradicator is on the trail of the House of El, and its hardwired directive to protect the Kryptonian genome permits no consideration for any other forms of life—not even those that share Kal-El’s blood.

Can the son of Superman harness his newly emerging powers in time to resist the annihilation of his humanity? Or will he be reborn into a new Krypton forged from the ashes of his mother’s world?

“Gorgeous spectacle is an undeniable part of Superman’s appeal, but the family dynamics are what make it such an engaging read.” —A.V. Club/The Onion

Peter J. Tomasi is a New York Times best-selling author known for his current work on SUPERMAN and previous projects BATMAN AND ROBIN, SUPERMAN/WONDER WOMAN, BATMAN - DETECTIVE COMICS, AND BATMAN ARKHAM KNIGHT, along with other commercially successful books, GREEN LANTERN COPRS,  BRIGHTEST DAY, EMERALD WARRIORS, AND NIGHTWING. Over the course of his career with DC Comics - more than two decades of hit books - Peter served as a group editor ushering in new eras for BATMAN, GREEN LANTERN, AND JSA along with special projects like KINGDOM COME. Peter also is the author of the creator owned books Light Brigade (Dark Horse) with artist Peter Snejbjerg, The Mighty (Dark Horse) with Keith Champagne and artists Peter Snejbjerg and Chris Samnee, and the critically acclaimed horror/drama series, House of Penance (Dark Horse) with artist Ian Bertram.
Loading...
or
Not Currently Available for Direct Purchase