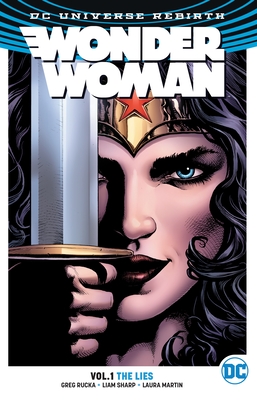 Heroic. Iconic. Unstoppable. Armed with her Lasso of Truth and imbued with the power of the gods themselves, Princess Diana of Themyscira—known to the world as Wonder Woman—is one of the greatest superheroes in history.

But who is she… really? Not even Wonder Woman herself knows for sure. Diana’s links to both the Amazons and the Gods of Olympus have been severed. Her memories are a tangle of contradictions that even her lie-detecting lasso cannot untangle.

To solve the riddle of her origin, she must embark on her greatest quest of all: finding a way back to her vanished home. To get there, she must team up with her greatest enemy, the feral beast-woman, Cheetah. Will this unlikely alliance shine the light of truth on Diana’s darkest secrets, or bury them—and her—forever?

Find out in Wonder Woman Vol. 1: The Lies—exploding from the blockbuster DC Rebirth event! Legendary Wonder Woman writer Greg Rucka (Batwoman: Elegy) makes his triumphant return to the character for the first time in years and joins renowned fantasy artist Liam Sharp (2000 AD) for one of the most momentous stories in Diana’s history! Collects Wonder Woman #1, #3, #5, #7, #9, #11 and the Wonder Woman: Rebirth one-shot.

“Bringing Greg Rucka back to WONDER WOMAN was one of the most exciting announcements of DC Rebirth.”—A.V. Club

“It’s hard not to love this book. ” —Nerdist

“One of the most crucial pieces of the DC Rebirth lineup.”—IGN

Greg Rucka is the New York Times best-selling author of over two dozen novels and far too many comics to count. In the field of comics, he is known for his work on such cultural icons as Batman in Detective Comics, Superman in both Action Comics and Adventures of Superman and Wonder Woman in both Wonder Woman and the critically acclaimed graphic novel Wonder Woman: The Hiketeia. He is the creator of Whiteout (with artist Steve Lieber), Queen & Country, Black Magick (co-created with Wonder Woman artist Nicola Scott) and Lazarus (co-created with his Gotham Central collaborator, artist Michael Lark).
Loading...
or support indie stores by buying on