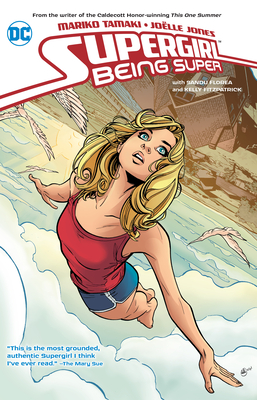 A Newsweek Best Graphic Novel of the Year

She's super-strong. She can fly. She crash-landed on Earth in a rocket ship. But for Kara Danvers, winning the next track meet, celebrating her 16th birthday and surviving her latest mega-zit are her top concerns. And with the help of her best friends and her kinda-infuriating-but-totally-loving adoptive parents, she just might be able to put her troubling dreams--shattered glimpses of another world--behind her.

Until an earthquake shatters her small town of Midvale... and uncovers secrets about her past she thought would always stay buried.

Now Kara's incredible powers are kicking into high gear, and people she trusted are revealing creepy ulterior motives. The time has come for her to choose between the world where she was born and the only world she's ever known. Will she find a way to save her town and be super, or will she crash and burn?

Caldecott Honor and Eisner Award-winning writer Mariko Tamaki (This One Summer) and Eisner Award-nominated artist Joëlle Jones (Lady Killer) combine forces for this incredible coming-of-age tale! This is the Girl of Steel as you've never seen her before.

Praise For Supergirl: Being Super…

“An interesting choice for those looking for more than the usual hero fare.” —Kirkus

"A pretty perfect balance between what one might expect in a more realistic, 'literature'-style comic book and a superhero comic."—School Library Journal, Good Comics for Kids

“This is the most grounded, authentic Supergirl I’ve ever read.” —The Mary Sue

“Supergirl: Being Super is a comic book that was long overdue. “ —SYFY Wire

"Being Super explores the challenges of growing up and coming to terms with changing friendships…as well as those pesky superpowers." —Entertainment Weekly

Mariko Tamaki is a Canadian writer living in Oakland. Works include New York Times bestseller This One Summer and Skim with Jillian Tamaki, Emiko Superstar with Steve Rolston and the YA novel (You) Set Me on Fire. This One Summer was the winner of Printz and Caldecott Honors in 2015 and received the Eisner for Best Graphic Album (New).

Joëlle Jones is an Eisner-nominated artist currently living and working in Los Angeles, CA. Since attending PNCA in Portland, OR, she has contributed to a wide range of projects and has most recently begun writing and drawing her own series, Lady Killer, published by Dark Horse comics. Jones has also provided the art for Supergirl: Being Super and Superman: American Alien (DC), Helheim, Brides of Helheim (Oni Press) and Mockingbird (Marvel). She's also done work for Boom! Studios, The New York Times, Vertigo and more! Joëlle will be taking on projects for DC and Marvel this year as well as continuing her series Lady Killer.
Loading...
or support indie stores by buying on
(This book is on backorder)