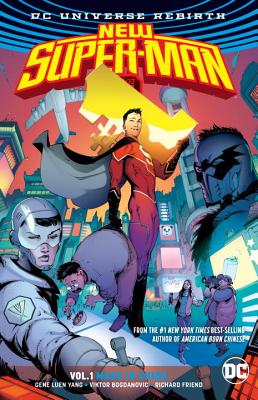 Made In China (Rebirth)

An impulsive act of heroism thrusts an arrogant young man into the limelight of Shanghai as China begins to form its own Justice League of powerful heroes. As the government creates their own Superman, will they live to regret the person they've chosen? Rising from the ashes of SUPERMAN: THE FINAL DAYS OF SUPERMAN and the death of the Man of Steel, will this New Super-Man step up to the challenge, or be crushed under the weight of his hubris and inexperience?

Praise For New Super-Man Vol. 1: Made In China (Rebirth)…

“NEW SUPER-MAN will break the mold.”—IGN

“Allows for thorough character set-up, the plot is as straight-forward and clean as they come, and the panels are colorful and kinetic.”—Newsarama

Gene Luen Yang began making comics and graphic novels more than fifteen years ago. In 2006, his book American Born Chinese was published by First Second Books.  It became the first graphic novel to be nominated for a National Book Award and the first to win the American Library Association's Printz Award. It also won an Eisner Award for Best Graphic Album - New. In 2013, First Second Books released Boxers & Saints, his two-volume graphic novel about the Boxer Rebellion. Boxers & Saints was nominated for a National Book Award and won the L.A. Times Book Prize. He made his mainstream comics debut on SUPERMAN, with artists John Romita Jr. and Klaus Janson.

His other works include the comics continuation of the popular Nickelodeon cartoon Avatar: The Last Airbender. Currently, he writes NEW SUPER-MAN for DC Comics.
Loading...
or
Not Currently Available for Direct Purchase